Wow! It has been a long time since the last update, and I have been working very hard on designing an experience that expands the game play without sacrificing all of the great mechanics that were already in place. I originally planned for this update to be relatively small and only take 2 months, but 291 days later, the game has been radically transformed. The design of the game evolved over the months, and what you see is actually the third iteration of the Exploration Update.

The map, regions, realms, shops and forges, item drops, editing, almost every single aspect of the game has changed, it might as well be an entirely new game! Prepare to have your mind blown!

Sandbox mode was designed as a secret place to test new features faster. As a result, sandbox mode is a pathway to many game breaking abilities some would consider unnatural. To start a new sandbox game, hold down right click instead of the normal left click.

One Life - Unlike previous versions, you only get a single life in survival. Once you die, it is game over.

Unlimited respawns - When you die, you get sent back to the editor where you can edit your island.

Editor errors - Even though your island might be disjointed without any floatrons, the game will still let you create your island. The game rules still apply, so just don't build islands without floatrons.

Free travel - At any point in time, you can travel to any region.

Starting items - Start with a lot of every single item in the game.

Note: Playing in the sandbox will spoil the experience of discovering new things. Try playing in survival first.

Let's start with the big picture first: the realm map. This realm map is now the fourth iteration of a long design process. This map is unique, while still playing off feel of my favorite game designs from Slay the Spire and Faster than Light. 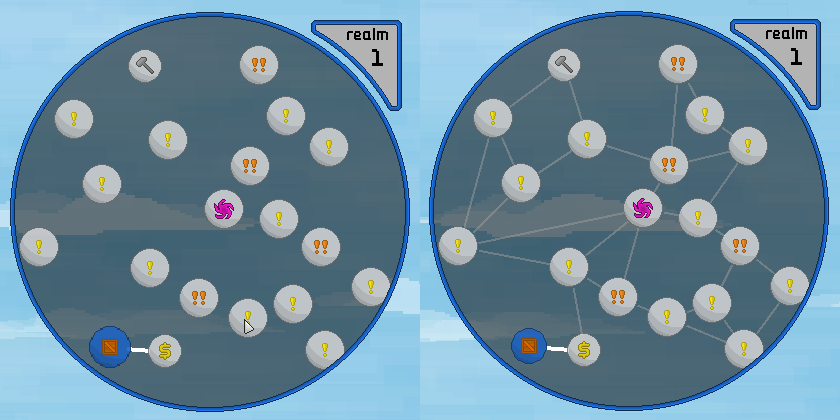 With the creation of realms and regions comes the need to travel between them. Warp gates allow you to travel within the current realm between regions, while realm gates will instantly take you to the next realm.

speeding into a warp gate, activating it, and warping away

going through a realm gate

Once you have collected a key, move over to the gate you want to unlock and hover your cursor over the gate. If the correct key is found in your inventory, the key will be shown and you can <RIGHT CLICK> the gate in order to consume the key and unlock the warp gate.

Move your island into the gate to start the charging process. When fully charged, warp gates will open the map to ask you to select your destination, while realm gates will instantly take you to the next realm.

With so many things scattered across a fairly large region, it can be really tedious running around trying to find portals, loot and enemies. Different colored indicators  ;on the radar can help you identify what you are looking at.

Activating and zooming in and out on the map

The radar has little indicators that can tell you the position of objects and islands close by. Things that are out of range will appear as indicators on the edges of the radar.

The Dark Order is slowly invading the realm, and invaded regions are completely overrun with harder enemies. Every time you warp to a new location, the Dark Order progresses forward a little bit, and while not noticeable at all for the first few warps, their invasion slowly picks up speed. Red regions indicate an invasion force and yellow regions indicate that an invasion will take place before your next jump. 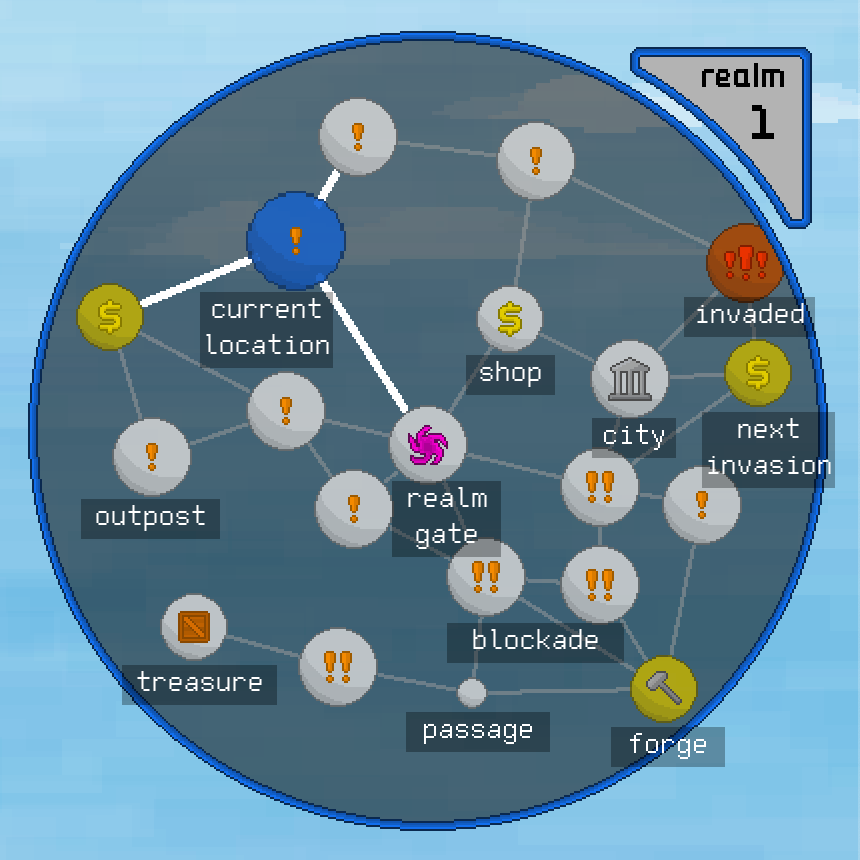 Enemies will now drop loot bubbles that you can collect! There are three types of loot bubbles: healing bubbles, money bubbles, and item bubbles.

These bubbles are dropped after killing an enemy and when collected, will fully heal your island.

These bubbles contain currency that you can use in the shop and the forge, usually dropped after killing an enemy.

These bubbles come from a variety of sources, like from destroying enemy blocks, killing enemies, or just lingering in a treasure realm. These loot bubbles are your primary source to obtain items to upgrade your island.

The item info visuals have gotten a significant upgrade, and are able to show all the important stats of any item in a nice compact visual. 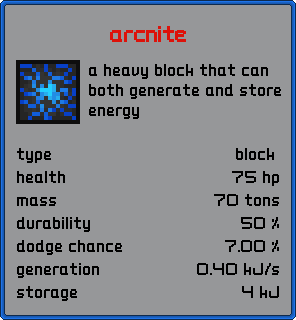 For the first time in all of the game (and it's predecessors) history, the inventory has been moved to the left side of the editor. While slightly awkward at first, it made so much more sense to put the inventory on the left. The old info bar has been replaced with a new toolbar below the inventory containing the help, stats, errors and warnings, inventory filters, trash, save (sandbox only) and load (sandbox only) buttons respectively. 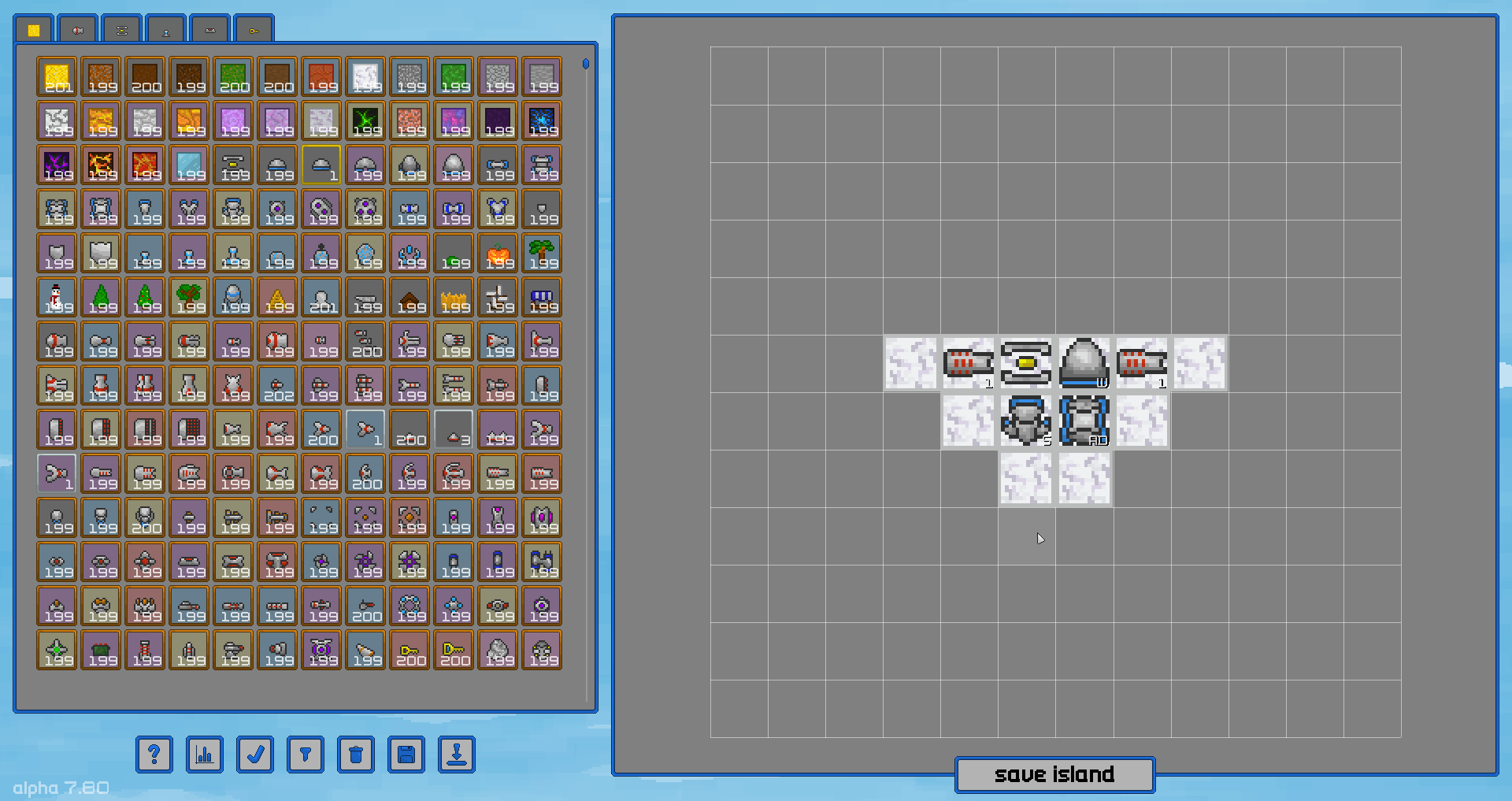 With the shop no longer being a tab in the editor, shops have taken a more immersive approach. In shop regions, shop islands will spawn with a little marketplace building. These special buildings are intractable by hovering your mouse over them and allow you to view and purchase their wares.

interacting with a shop

Forges have taken a similar approach like shops, with an immersive design as well as some significant overhauls. At the core, forging remains the same. The visuals however have changed slightly to be vertical rather than horizontal.

interacting with a forge

The purpose of the forge will no longer give you new items as an output. This functionality has been saved for another feature coming in the future. Forging is now the process of combining items into another item for the purpose of leveling that item up, or gaining tech bonuses.

Attachables are like buildings that can be attached to any face of a block, not just the top face, hence the name attachables. For spykes, this really brings them out into the role they were made for: ramming. The module mount is the other attachable added for the sole purpose of being able to place modules outside of the confines of the blocks on your island.

Enemies have gotten many reworks over the course of this update, so here is the gist of it:

- Enemy control has been made intentionally stupid

That being said, the progression of the game isn't completely right due to the enemy classes not being very well balanced.

The tutorial has been updated not only to include new content, but to teach you how the game works, by guiding you through the game. While the tutorial does tip the odds in your favor, failure is a possibility.

the tutorial guide to help you

I usually never resize the game, and so one day when I did I was absolutely shocked at the awful scaling and quality that the game turned into. The solution I found, was not to scale the game at all, but to resize all of the UI elements to fill the screen accordingly. The game has been built to handle screen sizes as small as 1024x640, and then resize the elements up from there.

A demonstration of the editor resizing the build area and inventory to suit the game size.

The console has gotten some changes to the commands and to make the console even more useful to me as a developer, most of them not really that notable for normal players. If you do want to explore it, press F1 to bring up the panel.

clicking a location to move the cursor

The game has undergone some item balances and reworks to keep you on your toes.

All weapons have had their damage per second almost doubled by either halving the cooldown of the weapon, or directly doubling it's damage output. Weapon rotation speeds have also been doubled so you can aim faster. For an action game, there was way too much waiting.

Movement speeds have been increased, and all the aerodynamic calculations have been removed. Acceleration is primarily based on your mass, so if you feel like you aren't going fast enough, lighten up your load.

Shields give you more maximum shields, but have far less regeneration. Stacking too many shields will not regenerate the shields that much faster. However, upon returning from an overload, your shields will come back fully charged. Shields used to be able to provide invulnerability due to their fast regeneration rates such that if you simply did not have the firepower, you would lose. Now you should always be able to destroy shields.

Flares are a significant change to highlight here as they no longer damage shields but have been given massive hit boxes to destroy projectiles.

This has absolutely zero impact on gameplay, I just thought it was time to add some extra effects into the game.

I have also added more function key support for common features in games.

These changes are absolutely game changing and really take the game in an entirely new direction. This update has opened the door for so many new possibilities, and there is still so much more that I want to do with this game. I look forward to what the future holds!

More details about the move over to Steam will be coming soon in a devlog! Stay tuned!

If you want to join in fun challenges or have any questions to ask, join the discord server!

For all of your game needs! 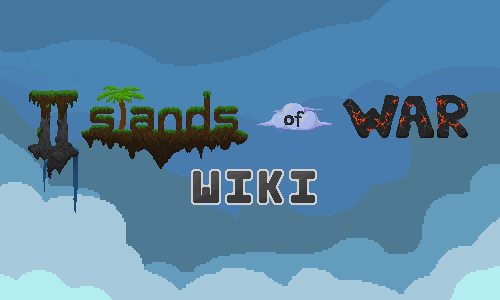 Reply
MEEP of Faith1 year ago