Note: v3.02 is a quick hot fix for v3.01 that had a major and easily reproducible crash while editing. Terribly sorry for that bug.

Lots and lots of small changes eventually pile up into an avalanche of changes really fast. While there weren't a whole ton of significant changes made, there were a lot of little tweaks here and there that make the game feel a whole lot better.

The most obvious change is the Christmas event! 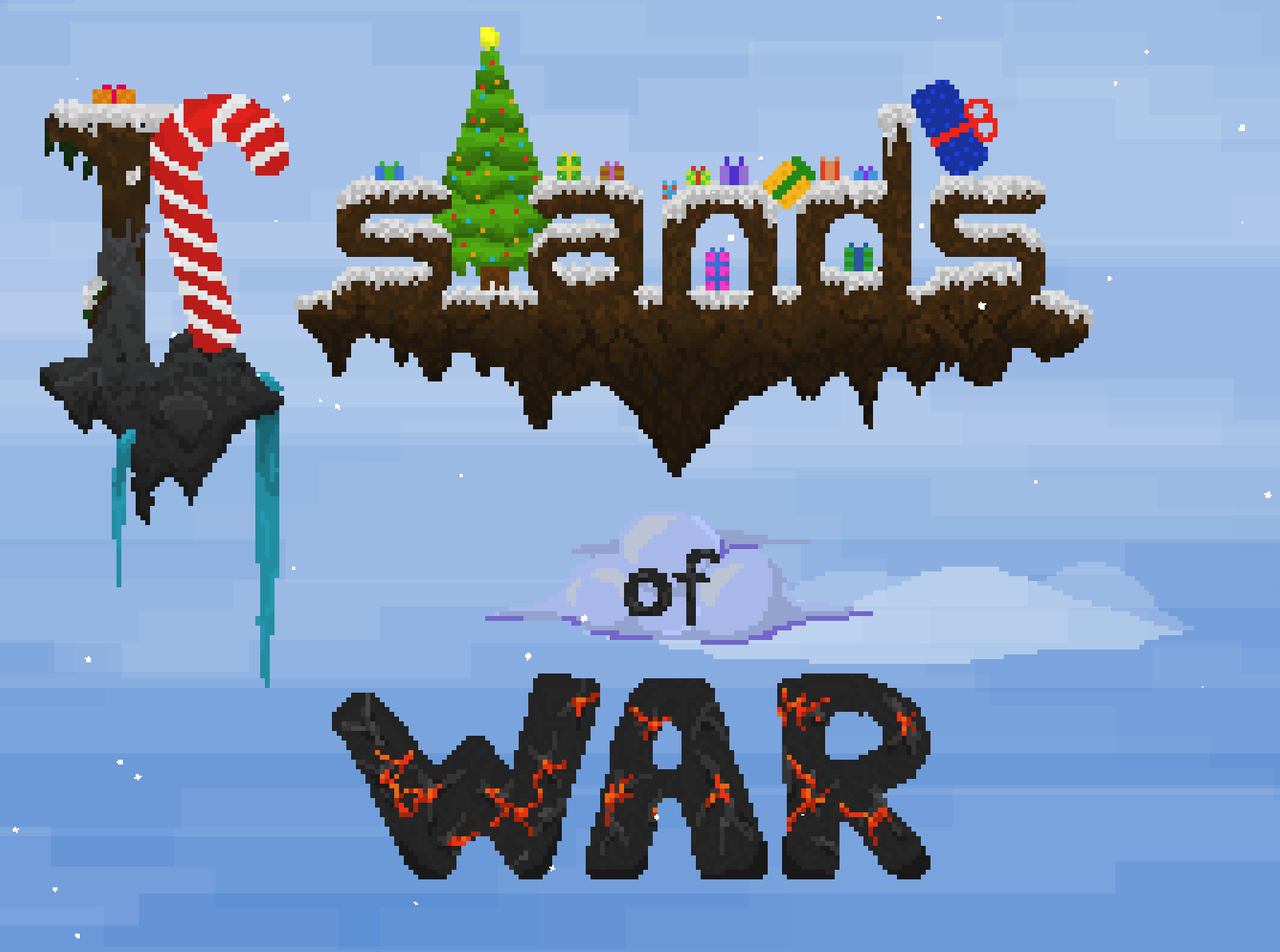 We have snow particles, snowmen, even a special and unique event based snow that covers the topmost block of your island! I won't spoil all the rest of the fancy changes I made, but here are some of the more general event changes:

Prior to this update, events have been hardcoded and specific to the version they were played on (eg. halloween update). Now, I have developed a cool system that changes the event based on the time of the year! So for the entire months of December and January you can enjoy the cool look of the Christmas update.

There were a whole lot of small movement changes ranging from speeds, collisions, and knockback.

Terminal velocity was an interesting experiment to see if I could somehow join the horizontal and vertical max speeds together. The major problem with this was that the shape of your island used to determine your maximum speeds respectively and by merging these two together, it created a harmful effect of almost entirely negating the shape of your island. Therefore, this has been reverted back to the old horizontal and vertical maximum speeds and terminal velocity has been removed.

Both the maximum speed and accelerations have been balanced. In general, it should feel a little bit slower than the previous version, but not too slow. Acceleration has also been increased a tad bit.

Islands felt were a little bit light, and so the acceleration due to gravity has now doubled to 45m/s/s. While this may seem like a lot, the increase in speed and acceleration should make it feel pretty good as well.

Honestly, there have been so many changes to collisions in the test versions, I wouldn't know if there is more or less collision knockback. Butin general, collisions now behave a lot more as expected and I have tried to make ramming enemies an actually viable strategy. Coupled with the acceleration increase you should be able to use ramming more practically to maybe finish some enemies off.

In addition, collisions should feel less bouncy at higher momentums, meaning that if done right you can actually go through enemy islands and take out a good chunk. Watch out though, these changes are also a significant buff to triremes, so beware of their deadly attacks.

These numbers have also been played around with a lot. The biggest change is that recoil now shows you the total recoil the weapon will provide across all its shots and volleys.

Danger zones now have updraft and downdraft. These powerful wind drafts will lift you up if you fall too low, or push you down if you soar too high. In addition, damage from the danger zones has been significantly decreased to be less punishing. They also will not destroy your blocks but will take them to 1 health.

downdraft in effect in a high altitude danger zone

Projectiles felt too much affected by your movement. So now instead of your full movement speed being applied to your projectiles, only half of it is. This should provide more accuracy and less funny looking shots. Does it defy physics? Probably. But real world physics ain't fun.

In the previous update, you would only lose the battle if you had no floatrons left. This hurt the AI's feelings a lot, since most of the time they would just slowly fall to their death and look really dumb while doing to. Therefore, this change has been reverted back, so if you do not have enough thrust to keep you in the air, you will lose (same goes for enemies). This also means that targeting enemies' floatrons is an effective strategy once again, since most of the time you won't have to remove them all in order to obtain beat them.

There were a whole lot of other small changes that I made. Some quality of life changes like the movement ones, just in a whole lot of different areas.

Not a word I throw around a lot, but yes. I have done some majorly significant optimizations to the battle. There should be a whole lot less lag in general, especially noticeable on lower end computers(like mine)

The old enemy indicator was rather buggy. Its location on the edges of your screen were not always correct and pointing in the right direction.

But there was nothing wrong with the old damage indicators!!! Yeah, but I like these ones a whole lot more. After a block receives damage, it will start to flash red. The faster and more intense the flashing, the more damage it has taken. Also, the damage image now goes outwards from the corners in both directions and are thicker as well. After 3 seconds of flashing, the indicators will fade into the background. The more damage the block has received, the less it will fade.

Hopefully, the flashing red will alert you better to which blocks are lower health so you can take out low enemy blocks and protect your own better.

Simple addition, but you will now receive non critical warnings if your island uses more energy than it can store or if your energy generation might be a little low. Hopefully this also helps new players to realize that some weapons require energy.

Shields are a vital part to the game and so as a result, every shop will contain at least one shield. Just for those of you who didn't know, this adds onto the mandatory stock of one good block, a weapon, a module, a tech and a floatron. Hopefully with this knowledge you can slightly reduce the RNG you encounter in a run.

In our discord server, we recently hosted a block submission event. In this event, anybody could submit any block idea, with or without a supporting image, in order for a chance to have them in the game. The winning mechanic had three separate people come up with the same thing. That mechanic is:

Yep, thats right. Healing blocks are now in the game! These blocks slowly regenerate themselves over time and can be a major setback if not taken care of quickly.

The third block is a rainbow block, but due to the nature of its mechanics, will not be added to the game this time around.

Thanks to the winners punchinglikes, Meep of Faith and Warmed for submitting these cool block ideas! The evergrowth block also won fist for the best block art and was drawn by Warmed!

Now I just want to take a moment and shout out to the discord server, where you can literally request and suggest your very own items into the game.

So many balances to so many things. Let's get started.

With v3.01 comes an end to the major changes to movement. Yes, there will be a few more movement specific updates coming with some more interesting changes, but for now, I think the movement is in an enjoyable place.

With the end of this chapter comes the beginning of a totally new chapter. Over the Christmas, I'm going to take a small break from the game development and work a little on my discord server bot. The next update for the game is gonna be pretty major and game changing as well, and the idea is still in progress, so do join the discord server to be involved with the next big thing (trust me, its gonna be awesome). It is also going to take some time, since I can already see a lot of core internal changes (hint: inventory system).

That's all for now! Take care, have a wonderful Christmas, and Happy Holidays!

I from CHINA.Many players in China like this game. Can you make it Chinese? It should be because Chinese players like me sometimes need to play games while driving translation software. This is very inconvenient. So I hope you can make it Chinese. It's a good game and I don't want to regret it.

I am terribly sorry for the inconvenience that this game hasn't yet been translated into Chinese. However, the game has only been in development for 6 months and is still in the alpha phase of the game, so getting a Chinese translation out anytime soon is not a top priority.

That being said, I have considered support for multiple languages when this game is closer to completion. This could be another year or so depending on how I feel about the game.

However at this stage in the game development I cannot make any promises regarding something so far down the line. I will do my best to try and see what I can do when the time comes.

Once again, sorry for the inconvenience.

*code for the dev tool from last devblog.

I'm the same person as before, SiliconchipsX90S.

Does the code for IIlands of war still work? Also were do I type it and what is it.

Apparently, this is the first message.

(P.S. can you fix beta testers for the prequel, ILands of war? I still play it and want to use the beta testers so I get all the blocks)

(P.S. Plz can you fix Beta Testers Anyway? It's REALLY HARD to beat and never completed it before. Also, as you know, I'm nostalagic and would REALLY appreciate it!)

The secret code from the last devlog can be inputted anywhere in the game (preferably the menu so it won't mess anything else up). After you type in the code, press enter and you should gain access to a secret. After it has been activated, use ` to open and close it.

With regards to the "Beta Tester" code for the first game, I haven't touched the code in over 2 years so nothing should have changed and it should still work.

I’d hate to be a bother but can you be more specific about were I put the code. Also what is the code. I really want to play with it and see what it does.

As for beta Testers, it DOES NOT work and would really like it if you could at least try to fix it (I think you may have forgotten to make it work because of new blocks in v1.32 (I remember!))

Also, you don’t need to fix this but the battling section in the help part of the menu is empty in the prequel as well.

With regards to Islands of War (outdated), in order to gain access to cheats (to my knowledge what the cheats are), put "Beta Tester" as your username. Word for word and letter for letter. It took me a while to go through my old source code to find what the codes were.

I am also aware that the game is left unfinished. It kind of died as time progressed and I lost interest in it.

Now with respect to IIslands of War, you can find hints to the secret code in the previous devlog. Its hidden in a gif and it will be pretty obvious what you need to do once you see the word hidden in the clouds. It does NOT add any game content and simply unlocks my developer tools for further debugging (there's not much more that you need once you have the sandbox mode).

Hope this clarifies things up.